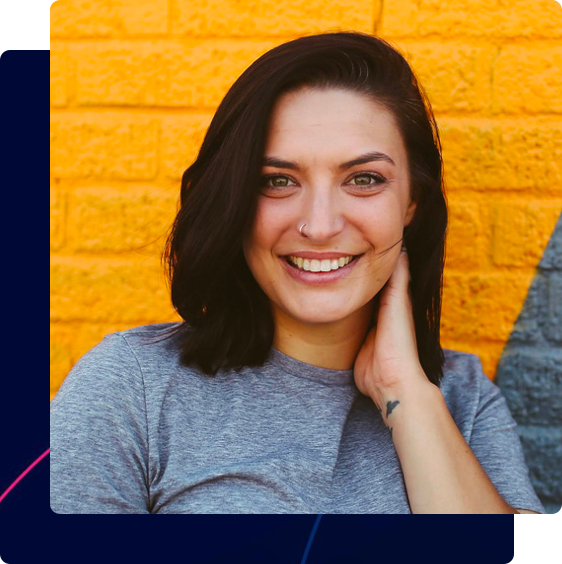 “I was able to build an entire ecosystem of content around the Resilient Retail brand, grow our audience, over double our downloads since season one, and connect with an audience that was way bigger than we were able to connect to before.”

Shopify launched their Resilient Retail podcast in October 2020. In less than two years, it's become a crowd-favorite, with more than 50 episodes with the smartest minds in retail.

As competition and expectations grew over time, Resilient Retail needed to improve how it promoted and repurposed content. Its growing audience spent time across a handful of different channels.

Kristen LaFrance, the host of the show, knew that the content resonated with her audience. To get to the next level, though, she knew she had to do more.

The only problem? Kristen was a one-woman team responsible for everything from getting guests to editing interviews. She had so much work in front of her, though, that she was burnt out by the time she needed to promote her podcast.

All her experiences seeking help in the past all felt disjointed and demoralizing. Individual freelancers weren't always aligned on her vision. And they weren't accountable to create content that felt connected with the work from other freelancers. Even if she had the best freelancers in the world — and she certainly looked — it was a black hole of her time. It always felt like too much oversight, which took her away from the deep and creative work her audience loves her for.

“When I was trying to solve this problem on my own, I was ultimately just hiring single freelancers for video, for the writing, for blog posts, for the social media manager. Which meant I actually added an entire other job to my job.”

Kristen dreamed of a unified system for repurposing content. A system that would create a "cohesive waterfall" of content from each episode. She wanted her audience to get value out of her conversations, regardless of which channel they were on. As Kristen put it:

“One of the biggest struggles with finding a solution was often that those individual contributors to the project didn't have that full scope of what we were doing. Each piece felt like it was living on its own, when in reality I wanted everything connected.”

After hearing about it from a friend, Kristen turned to Procket  to repackage Season 2 of the Resilient Retail Podcast.

Procket took each conversation and turned it into a waterfall of promotional and evergreen content across all Kristen's channels.

Procket offered the benefit of a single content team involved from beginning to end. Podcast specific expertise meant the team understood what was involved in creating and supporting a growing show. Meanwhile, Procket’s skilled content writers were adept at pulling out key interview insights and making them shine across channels.

Procket was a single team of in-house creatives from start-to-finish. Channel-specific creative experts meant the team understood what it took to start and grow a show. Great writing from the Procket team underpinned that work. The writers found key insights from the interview and brought them to life across channels.

Kristen struggled to create one centralized home for all her marketing assets. Now, she puts them all in a content repository from Procket that serves as home base. Kristen uploads conversations, gets her latest assets, and chats with the Procket team in once place. With this, it's easier for her to share assets with stakeholders and across Shopify channels.

The best part of working with Procket? The content itself. Each episode, Kristen got a show introduction, key takeaways, a blog post, tweets, LinkedIn posts, newsletter copy, and more. Each piece highlighted her key themes and resonated with the Resilient Retail audience. Kristen could finally put promotion on autopilot and spend more time doing what she did best — hosting.

Kristen saw results from Procket before her current season ended.

“I started seeing results the very first time I was delivered anything from Procket...In just the first month of Season 2 we over doubled our podcast downloads from the most popular month in Season 1.”

Much of that success comes from starting with great conversations and creating content around it. Every interview Kristen hosts becomes a core asset. Each asset has its own insights and takeaways. Procket then atomizes that content into content like Twitter threads, a newsletter, and more.
‍

As Kristen does this for each episode, she’s able to drive more engagement, more interactions, and, ultimately, more listeners. It's a virtuous cycle of growth.

She finally has a team and a model she trusts. Procket isn't another faceless freelancer. It's an in-house team that loves content like she does.

After impressing her teams at Shopify, Kristen and Procket will work together to shape the next phase of Resilient Retail.

“Working with Procket, I feel like I have an entire team that's working on the podcast with me. That's learning with me. That's taking all the insights that I'm getting from my guests and helping them understand them better, learn them deeper, and share it with the audience in a way that truly makes sense.”

- No bandwidth for podcast promotion

- A disconnected team of freelancers

- One aligned team involved from beginning to end

- An ecosystem of content that resonates with the audience

- The benefits of a full team, no management required

Get in touch about your needs.